As part of our “travel back in time” series, here’s a look at some stunning poster designs promoting travel by ship during the early to mid 20th century. This breathtaking 1931 L’Atlantique poster by Adolphe Mouron Cassandre (1901-1968) starts us off on our journey; little can beat the timeless appeal of the artwork by one of the greatest poster designers:

Whether advertising ferry services, short voyages or long distance cruising holidays, shipping companies looked to beat competition and entice people to travel the high seas with them to reach their destinations and discover new lands in luxurious comfort. Although flying took over as a more viable option for many as a quicker means of travel during the post-war jet age, cruises remained a popular choice as holidays in themselves, offering trips ashore and the opportunity to relax and unwind through the variety of on-board facilities and entertainment.

One of the world’s largest shipping companies, Hamburg-America Line (established 1847; now Hapag-Lloyd), initially offered cruises to Europe and North America before expanding its operations to cover all continents. These 1930s posters advertising the Hamburg-Amerika Linie were designed by German artist, Albert Fuss (1889-1969): 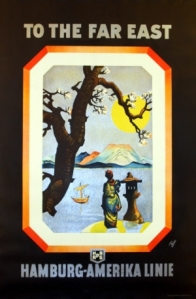 The classic 1930s Art Deco style in the use of bold text and colours is captured wonderfully in these posters promoting far-flung cruises to exotic countries and short-hop ferry rides:

This rare and very large poster for Cunard White Star featuring their flagship ocean liner launched in 1934, R.M.S. Queen Mary (now moored in California as a museum and hotel), with the slogan “America this year!” above the city skyline that’s almost dwarfed by the vast ship, really captures the essence of the era:

During the Second World War, many passenger cruise ships were taken over for the use of troops, supplies and other wartime services. The Normandie was one such ship: This French ocean liner was built for the Compagnie Generale Transatlantique as the most powerful steam turbo-electric-propelled passenger ship ever built and the most luxurious and largest ocean liner afloat at the time, rivalled only by the RMS Queen Mary. After being seized in New York by the Americans during World War Two and renamed USS Lafayette, the liner caught fire in 1942 while being converted into a troop ship and was scrapped in 1946. This 1985 printer’s proof poster commemorates 50 years since her launch:

This ocean liner, SS Roma, was built in 1926 and taken over by the Italian Navy for conversion into an aircraft carrier in 1939 for World War Two, renamed Aquila. In 1943 she was seized by the German forces and was partially sunk at Genoa by Italian two-men torpedoes in 1945. She was finally scrapped in 1951/2. The rather majestic design of this 1920s poster serves as a good reminder of the ship’s more celebrated launch years: 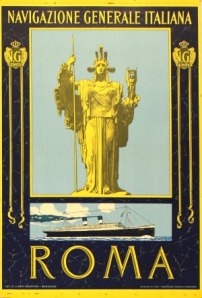 After the War, advertising during the 1950s-1960s returned in glorious mid-century style technicolour promising festivities and fun on board, providing passengers a chance to fully enjoy their holiday time travelling by ship rather than by plane: 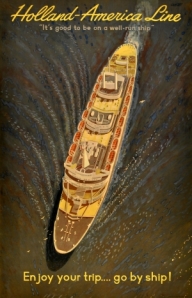 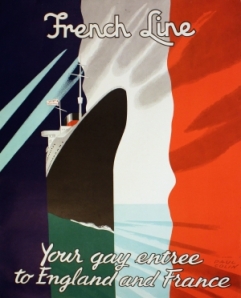 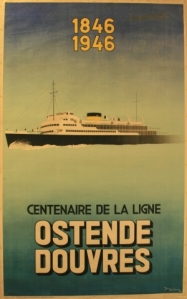 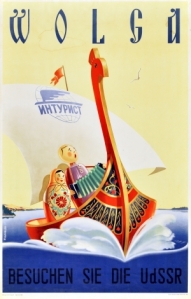 Click on the image links above or visit our website at www.antikbar.co.uk for more information on this selection and to browse all our original vintage posters. For more updates, follow us on:

The Visual Impact of Nourishment in Vintage Posters

Summer Exhibition at AntikBar Nourishment in the form of food and drink products is widely represented in original vintage posters in various capacities, from advertising specific brands and promoting a healthy lifestyle to improving agricultural production, encouraging self-sufficiency and reducing waste. The different customs, traditions and practices of consumption in social communities are closely connected […]