In the Spotlight: Edward McKnight Kauffer 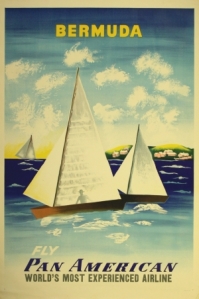 American artist and illustrator, Edward McKnight Kauffer (1890-1954), was one of the most renowned poster designers of the 20th century. Born Edward Kauffer in Montana, he lived in an orphanage from 1893-1899 where he started to draw. On moving back home after his mother’s re-marriage, his mother and step-father supported his artistic talent and aspirations. He moved to San Francisco in 1910 where he worked for the art dealer and bookseller, Paul Elder, and continued his art studies in the evenings at the Mark Hopkins Institute, California School of Design. A professor at Utah University, Joseph McKnight, sponsored him in 1912 and gave him a loan to move to Paris. (Out of respect for his sponsor, Edward Kauffer adopted McKnight as his middle name.)

In 1913 he moved to France via a short stint at the Art Institute of Chicago and a visit to Munich, where he was undoubtedly influenced by the European post-impressionist paintings and move towards modernism on display, as well as poster art and typography. He continued his studies at the Academie Moderne until the outbreak of World War One when he moved to London in 1914 with his wife, Grace Ehrlich (a pianist), and daughter, Ann.

In London, he was introduced to Frank Pick, Publicity Manager for London Underground, leading to his commission to produce a staggering 140 posters for London Underground, later London Transport. His style of artwork developed from a more traditional painterly style to a more modern and dynamic graphic design style and his success as an advertising poster artist was outstanding. In 1921 he exhibited in New York but, not achieving the same response from commissions as he had in London, he returned to England. 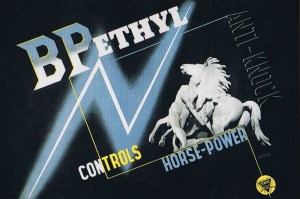 In 1923, on one of his regular visits to Paris, he met Marion Dorn, an American interior designer. He left his wife and daughter for her and their relationship included professional collaboration on a few projects, such as the interior and advertising designs for Orient Lines’ flagship ocean liner. (Edward and Marion later married in 1950 but then separated in 1953.) Now a renowned graphic designer, he was also busy with other commercial clients, including BP and Shell Oil, and he was involved with illustrating books and book covers, textiles, theatre and interior design.

At the start of World War Two, he reluctantly moved to New York. His commissions in America started with MOMA and he went on to produce propaganda posters during the war before working for his final client, American Airlines, in 1947. The success and recognition he achieved in London was soon repeated in New York and, in terms of his commercial work, he is now most well known for his London Underground, Shell and American Airlines poster artworks, as well as his book designs for Lund Humphries. Edward McKnight Kauffer was certainly a prolific and dedicated designer, working right up to his death at the age of 64 in 1954. 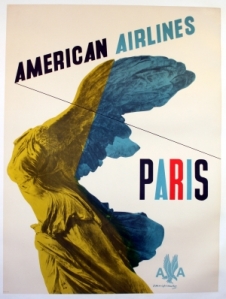 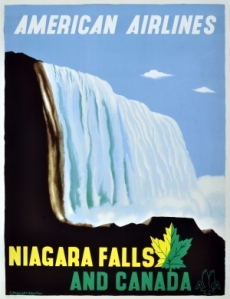 Here is a summary of a few of Edward McKnight Kauffer’s awards, associations and other achievements:

1914 – Joined the London Group
1919 – Formed the X Group with Wyndham & Lewis and joined the Arts League of Service (ALS)
1924 – Published his own book, The Art of the Poster
1930 – Appointed Art Director for the book publishers, Lund Humphries
1934 – Awarded Honorary Fellow for the Council of Art and Industry
1936 – Awarded Honorary Designer for Industry by Royal Society of Arts in London
1945 – Received a Certificate of Honour for his wartime propaganda posters
1947 – Awarded Distinctive Merit from the Art Directors Club of New York and became Honorary Advisor to the Department of Public Information of the United Nations 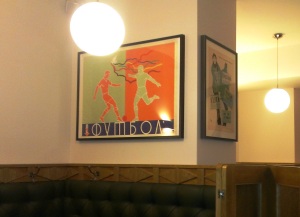 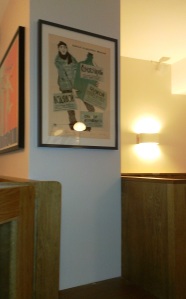 Intourist – your holiday in Yalta and Sochi, artist unknown (1960s) and Soviet Skiers – The Old and The Young Come Out to the Start Line, E Artsrunyan (1968).

Visit our website at www.antikbar.co.uk and scroll down our blog page for more sports posters. You can also follow us on:

Did you know…? The Soviet Union participated for the first time in the 1956 Winter Olympic Games in Cortina, Italy, making quite an impact by winning the most medals (7 gold, 3 silver, 6 bronze).

Visit our website at www.antikbar.co.uk for more sports and skiing posters. You can also follow us on:

STOP PRESS: Don’t forget to check out our Summer Olympic Games posters, including these from Munich 1972: 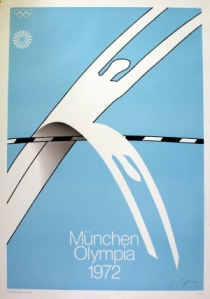 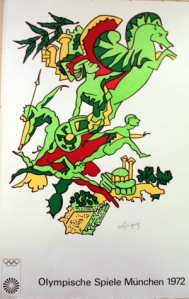 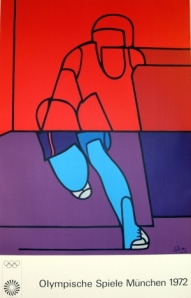 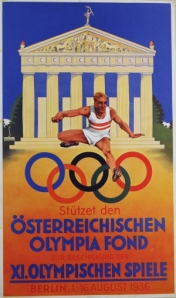 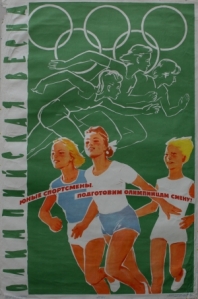 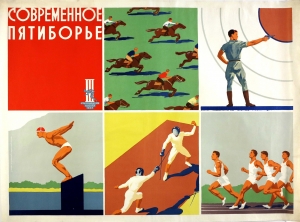 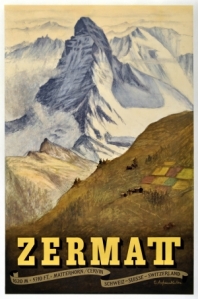 Skiing posters, like many advertising posters, were originally produced to entice holiday-makers and winter thrill-seekers to resorts and alpine areas. The early- to mid-century skiing posters were often designed by notable artists of the time and are colourful, dynamic, glamorous, nostalgic and stylish, sometimes also fun and quirky. The ones that survived now make for a good investment, ideal for decorating chalets and “back home” as a stunning reminder of a memorable ski trip. Christie’s hosts an annual ski auction every January and has recently seen an increase in popularity and demand for these eye-catching, unique designs. 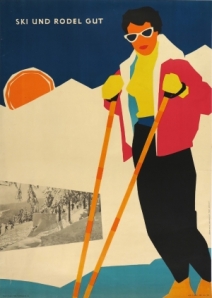 The Antiques Trade Gazette commented on the 2013 record-breaking results seen in the annual Christie’s ski auction: “What better way to relive that exhilarating ski holiday in the Alps than an eye-catching vintage poster of a breath-taking mountain view or athletic skier’s descent through perfect white powder?… The fact that so few have survived adds to their value and attraction. In general, a poster with plenty of decorative appeal showcasing a prestigious resort, such as a Swiss or French one, will be the most sought-after. Often style, rarity, artist and condition are of secondary importance to the buyer. Yet, as is the case with many collectors, they choose to buy simply because they love a particular poster, and…buyers should also have an appreciating asset… Selling rates and prices have climbed consistently in recent years…” (pp6-7, issue 2079, 23/1/13)

Following Christie’s most recent ski auction (22/1/14), Nicolette Tomkinson, Director and Head of Department commented: “We are very pleased with the results of the 16th annual Ski sale at Christie’s which remains the only dedicated auction of its type in the world. The finest examples of vintage ski posters were highly sought-after, in particular for the section of Swiss posters, led by Emil Cardinaux’s poster of Zermatt which sold for £21,250. There was fierce competition for posters depicting resorts in Italy, Switzerland and Austria, many of which are now en route to decorate chalets across the globe.” The Antiques Trade Gazette added that, despite some of the high prices achieved, “posters priced below £1,000 can still make a striking addition to any modern decor” and that “vintage ski posters are packed with decorative appeal…little wonder then that this has become such a popular area of the vintage posters market, gathering momentum for quite some time now and attracting an ever-growing collector base. The appeal combines nostalgia for the ‘golden age’ of travel.” (pp8-9, issue 2127, 8/2/14)

Katherine Higgens commented on Christie’s 2012 Ski Sale in Homes and Antiques: “Conjuring snowy peaks and the glamour of apres ski, it’s no wonder vintage ski posters are whooshing out of the salesrooms… Launching into the ski poster market is easier than you might think. A good starting point is to focus on locations you have visited. After that, what you select is governed by how much you want to spend… Posters for popular resorts tend to be the most expensive.” 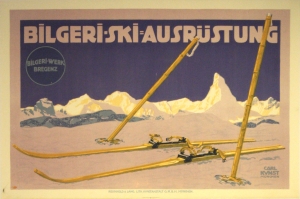 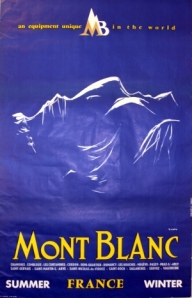