NOTE: AntikBar is running a Caption Competition a week before the end of this exhibition, from 15-22 March. The winner will be contacted after the draw on Saturday 22nd March and sent a copy of the exhibition catalogue. Click here for details on how to enter. Good luck!
__________

GRAD: Gallery for Russian Arts and Design in collaboration with AntikBar is pleased to present “Kino/Film: Soviet Posters of the Silent Screen” from 17 January to 29 March. As the UK/Russia Year of Culture begins, this exciting exhibition examines the golden age of Soviet film posters and is co-curated by Elena Sudakova, director of GRAD, and film critic and art historian Lutz Becker.

The 1920s saw the advent of new and radical graphic design created to advertise silent films across the Soviet Union. Film posters of this era have become masterpieces in their own right, produced at a time when innovative on-screen techniques were being incorporated into the design of advertisements. Over 30 works by Aleksandr Rodchenko, the brothers Georgii and Vladimir Stenberg, Yakov Ruklevsky, Aleksandr Naumov, Mikhail Dlugach and Nikolai Prusakov, will be on display. 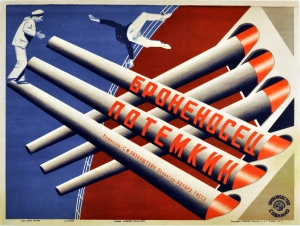 During the mid- to late-1920s cinema flourished in the Soviet Union. A relatively new art form, film matched the revolutionary ethos of an emerging generation of artists for whom fine art was deemed bourgeois. The advantages of using film as a propaganda tool for the largely illiterate masses were not lost on the government, who supported the burgeoning film industry. A state-controlled organisation, Sovkino, managed the distribution of foreign films, including those from the US which were very popular; profits were used to subsidise domestic film production. These Soviet films soon gained an international reputation through feature-length masterworks such as Battleship Potemkin.

Under the umbrella of Sovkino, Reklam Film was the department that controlled the production of film posters across the USSR and at its helm was designer Yakov Ruklevsky, who engaged a number of talented young artists. They created a whole new visual vocabulary for film posters, both foreign and domestic, incorporating the practices they saw on-screen. As the films were black and white, the designers employed their artistic licence to great effect, using vivid colour blocking and dynamic typographical experiments to capture the essence of each production, sometimes without having even seen it. The result is a body of work which is both powerful and enduring.

To accompany the exhibition GRAD will host screenings to showcase the innovative techniques employed by the poster artists and film-makers of this era. Excerpts of seminal films Battleship Potemkin, October and the ground-breaking documentary, The Man with the Movie Camera, will highlight the symbiotic relationship between the pioneering vision of directors such as Sergei Eisenstein and Dziga Vertov and the output of the poster artists engaged to promote them. Techniques such as cinematic montage, repetition, asymmetric viewpoints and dramatic foreshortenings were used in the creation of both the films and the posters, leading to the appearance of a distinctive and highly influential body of design. Mass produced during the 1920s, the posters were made for one use only and few originals survive.

The exhibition at GRAD is a rare opportunity to see these seminal works, many of which have not been exhibited in the UK before – for more information, please visit the GRAD website. Address: 3-4a Little Portland Street, London W1W 7JB. Open: Tue-Fri 11am to 7pm, Sat 11am to 5pm.

For those unable to make it to the exhibition, here are some links to clips on YouTube that might be of interest:

The audio guide for some of the movie posters displayed is now also available at https://soundcloud.com/grad-london and visitors to the exhibition will be able to access this via their smart phones using the Blippar app. For more information, visit Art Daily for a review of the Blippar app being used at GRAD to enhance visitors’ experience to the exhibition (and those unable to make it).

Visit the News & Events page on our website for reviews and listings information, such as this review by Adrian Yekkes:

“Stepping inside, I found myself in a world of striking, bold, colourful images from the 1920’s as I viewed the 30 posters that constitute the current exhibition – Kino/ Film: Soviet Posters of the Silent Screen… pioneering designs, using strong colour blocking and experimenting with typography to communicate the message of each film. This contrasts with the films themselves which were of course silent and made in black and white. This period of Soviet cinema…also saw the development of techniques such as cinematic montage, repetition, asymmetric viewpoints and dramatic fore shortenings. These techniques were used in producing both the films and posters. The posters were designed for one use only and once the film had been shown, the vast majority were disposed of. Very few remain which makes the current exhibition all the more important. The exhibition includes the simultaneous screening of some of the most important films from the era… Londoners are extremely lucky to have small galleries such as GRAD… The posters in the current exhibition are the property of Antikbar, dealers in antique posters. Their website is a show in itself!”

For more news & events and to browse our original vintage posters, please visit our website at www.AntikBar.co.uk. You can also follow us on:

The Screw from Another Machine – Stenberg Brothers

A Life for a Life – artist unknown

A Woman from the Fair – Nikolai Prusakov

A Man and a Livery – Stenberg Brothers

AntikBar will be participating again at this fun festive vintage event in The Great Hall at The Urdang, Old Finsbury Town Hall on Rosebery Avenue; a Grade 2 listed Art Nouveau gem situated in the heart of Clerkenwell. Open 11am-5pm (trade 10am). Tickets £4. We look forward to seeing you!

Gifts for Him review –
“Treat movie buffs to an original film poster of their favourite flick. AntikBar bring their stunning and highly collectible range of posters which look amazing framed and hung on the wall. You’ll find the great names of the film world including Alfred Hitchcock, Bruce Lee and James Dean from a time when advertising really was a work of art.”

“The ultimate Christmas shopping destination! A treasure trove of unique gifts for him & for her, gorgeous treats, party dresses and decorations… fashion, accessories, textiles, home ware, books, maps, poster art, children’s ware, fine china, objects from the turn of the 20th century & more… Something for everyone! Stop off at our much loved tea room serving scrumptious festive food and the delectably voiced Noelle Vaughn will be serenading guests with Christmas carols throughout the afternoon. Make your Christmas a vintage one…!”

For more news & events and to browse our original vintage posters, please visit our website at www.antikbar.co.uk. You can also follow us on:

We are pleased to announce that AntikBar is now a Member of LAPADA, The Association of Art & Antiques Dealers, as well as the IVPDA.

“Since its inception in 1974, LAPADA’s membership has grown to over 600 members making it the largest association of professional art and antiques dealers in the United Kingdom. Although the majority of its membership is UK based, LAPADA also currently has 50 members in 16 other countries. Membership is only open to those who meet the Association’s requirements as to experience, quality of stock and knowledge of their subject. Between them, members cover virtually every discipline from antiquities to contemporary fine art.”

For more news & events and to browse our original vintage posters, please visit our website at www.antikbar.co.uk. You can also follow us on:

Member of the International Vintage Poster Dealers’ Association (IVPDA) and The Association of Art and Antiques Dealers (LAPADA).