Spotlight on the Stenberg Brothers

Vladimir (1899-1982) and Georgii (1900-1933) Stenberg rank amongst the most notable Soviet Constructivist artists and graphic designers of the early 20th century.

Both brothers were born in Moscow to a Swedish father and Russian mother and both studied engineering before attending the Stroganov School of Applied Art in Moscow and Free Studios. They produced their first works of art in 1918 and co-founded the OBMOKhU (Society of Young Artists) in 1919, exhibiting with fellow Constructivist artists from 1919-1923, and were members of the INKhUK (the short-lived Institute of Artistic Culture) from 1921-1924.

Now firmly established in the avant-garde art world, they went on to experiment in different media, from theatre sets and costume design to sculpture. It was, however, their revolutionary approach to movie poster design that was to set them apart from their contemporaries. Pulling together their artistic experience and knowledge of film theory, the movie posters produced by the Stenberg Brothers during the 1920-30s displayed an innovative use of perspective, geometry, typography and colour to convey a dynamic sense of movement and energetic depth.

Here is our current collection of original vintage booklets and posters featuring artwork by the Stenberg Brothers: 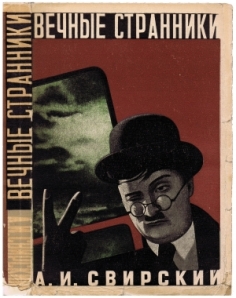 This stunning and rare Battleship Potemkin poster by the Stenberg Brothers is considered to be one of the greatest movie posters of all time. The exceptionally bold and powerful avant-garde poster design was produced to promote Sergei Eisenstein’s epic propaganda film depicting the historical 1905 naval mutiny in Odessa by the crew of Battleship Potemkin against the Tsarist officers. This pioneering silent movie is consistently voted as one of the greatest films, primarily due to Eisenstein’s use of montage and experimental film editing to create a dramatic portrayal of the events for maximum emotional effect from the audience.

The Stenberg’s creative use of vivid colours, geometry and perspective can be clearly seen to full graphic effect in this poster, complementing the movie’s sense of struggle and revolutionary air of change. As ground-breaking propaganda tools, both the movie and poster showcase an age of heavy industrialisation and move towards more modern warfare, as well as emphasising the growing unrest during this period between the ruling Tsarist elite (the officer falling overboard) and the ordinary citizen (the able-seaman standing on one of the guns). The enduring success of this poster lies in its ability to provide the viewer today with as rich and powerful an emotion through its expressive use of graphic language as the day it was originally displayed to attract the attention of a widely illiterate population almost a century ago.

Click here to watch the film via YouTube with English subtitles and search under Bronenosets Potyomkin / Броненосец Потемкин for more information.

Following his brother’s untimely death, Vladimir Stenberg continued to work as an artist and graphic designer (he was also selected to organise the 1947 May Day display in Moscow’s Red Square), but he was unable to surpass the success the brothers achieved as a team during the 1920s and early 1930s.

Note: You might also be interested in our Russian Constructivist Posters page. To browse our extensive collection of original vintage posters from around the world and for more information and updates, please visit our website at www.AntikBar.co.uk and follow us on: