Inspired by the Modern Masters in Print touring exhibition organised by the V&A London (scroll to end for more information), here’s a look at the original vintage Salvador Dali and Andy Warhol posters available from AntikBar:

The renowned surrealist painter was commissioned by the French National Railways (SNCF) in 1969 to produce a series of six travel advertising posters, for which Dali composed and reworked the final lithographs, all signed ‘Dali 1969’. As explained at the exhibition: “for Dali, printmaking was an exercise in experimentation and through it he developed many imaginative new processes.” These posters include Dali’s original artworks and use of symbolism with recognisable scenes from the areas they advertise, including the medieval cathedral and astronomical clock of Strasbourg for Alsace and the Pyrenees running below his butterfly oil painting for Roussillon. 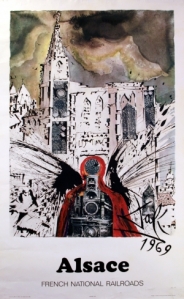 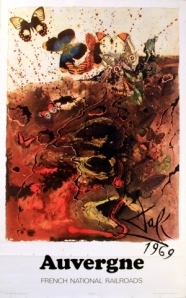 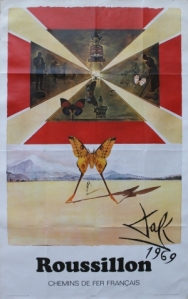 Featuring the iconic silkscreen image of Marilyn Monroe by American pop artist Andy Warhol, this original vintage poster advertises the Collection of Karl Stroher. As a successful and often controversial commercial artist, Warhol used various forms of media to develop his art and, as the exhibition explains: “Warhol’s prints were his primary means of expression and central to his body of work. His screen-prints based on mass-produced images challenged the concept of the ‘original’ print.” 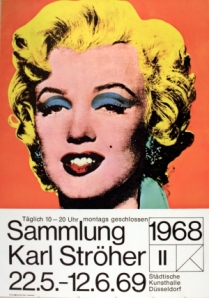 Our next auction will be held on Saturday 26 June, starting online at 2pm (UK time). This auction features a wide variety of original vintage posters from around the world including travel, advertising, sport, war, propaganda and movie posters. View our catalogue and register to bid online in advance via:  — Invaluable at www.invaluable.com/catalog/s7bnv51vg7  — Live Auctioneers at www.liveauctioneers.com/catalog/204896_original-vintage-posters-summer-sale/  — The Saleroom at www.the-saleroom.com/en-gb/auction-catalogues/antikbar/catalogue-id-antikb10023   Please note: […]